Nothing like an announcement before the show to scare the horses, and the opening night of the English National Opera’s The Valkyrie started with three. The first one we had all read in the newspapers: The local Westminster Council security official had poured cold water on the ‘magic fire’, supposedly the spectacular finale of the second part of the new setting. Richard Jones scene from Wagner Ring. The others were just as gloomy: Nicky Spence had a cold but would sing Siegmund nonetheless, and the also cold-stricken Susan Bickley would play the part of Fricka while one of the Valkyries – Claire Barnett-Jones – sang the role from behind the scenes. . As it happened, neither of the two vocal ailments turned out to be a disaster, and the fiery ending turned out to be the least of the problems with this ultimately hollow-hearted co-production with New York’s Metropolitan Opera.

So what went wrong? Jones is an extremely experienced director with a string of hits including the Met’s Hansel and Gretel and more recently the elegant Royal Opera Bohemian. He was also the director of a notoriously hated film Ring Cycle for Covent Garden in 1993, a fact that raised eyebrows when he was announced to direct the first ENO Ring in 15 years, the one intended to replace the equally notorious Robert Lepage of the Met Ring, another of the wettest firecrackers in the opera house. Thirty years later, this new Valkyrie eschews some of the crazy excesses of Jones’ previous effort, but it also lacks a lot of his imaginative boldness. It’s always hard to say what a director is trying to say when it comes to Rings second part without the benefit of seeing Das rheingold (postponed due to the pandemic until next year), but even so, this production seemed to run out of ideas, and many of those had felt like duds.

The curtain rises to reveal a tiny hut on an otherwise bare stage, enclosed on three sides with pleated gray curtains (Stewart Laing designed both the uninspiring set and the bright, lively costumes). These dismal drapes remain everywhere, sometimes lifting up in the back to allow a character or setting to awkwardly turn on or off. The hut, which looks like a modern prefab, is barely taller than the huge dead tree growing in it, wondering why they didn’t just build it a yard to the right or left. The opening storm music finds Sieglinde reminiscent of Siegmund from a trap door in front of the hut. Obviously, she needs him, but his instant jump into his arms before ricocheting off the floor defeats all of Wagner’s subsequent musical efforts to gradually explore their connection. 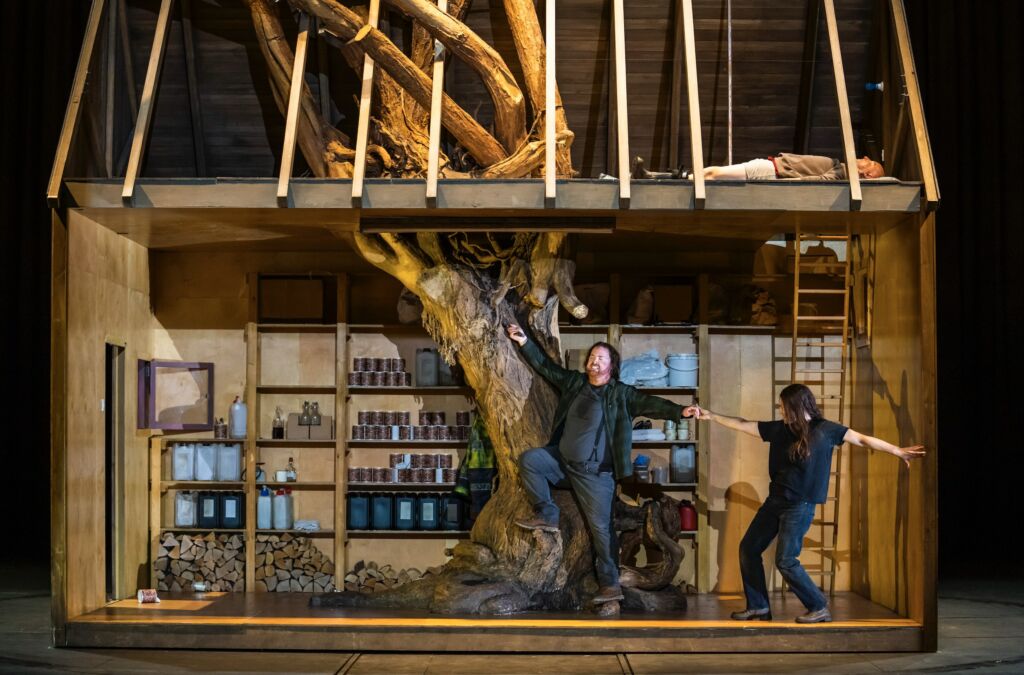 The hut is filled with logs, gasoline and cans, the latter – according to a preview in The Guardian – containing dog food for later consumption by Hunding’s henchmen. They may or may not be dogs – they sure don’t act like them – but his T-shirt team seem to be eating him politely enough anyway. In one of the many worn-out tropes, Hunding brutally pounces on Sieglinde every time she opens her mouth, making you wonder why she is bothering. Meanwhile, outside in the dark are hiding several figures dressed in black. Are they Norns, perhaps, or gnomes? Who can say ? Their job seems to be just to watch, wait and sometimes move the landscape.

Act Two takes place in a more upscale log cabin, mostly two-dimensional (Jones often goes for this slightly distanced geometric look). Brünnhilde, wearing what looks like pretty white pajamas decorated with Bayeux Tapestry motifs, plays darts while awaiting her instructions from Wotan, here dressed in a surprisingly red rain outfit, more functional than grandiose. Later, the cab leaves by truck leaving the stage bare for Wotan’s narration – a moment of visual relief at what is the opera’s emotional and philosophical still point. Halfway through a giant projection of a tongue-out Alberich appears behind the action – we know that because he has “Nibelung” tattooed on his forehead. Lately, he reappears, stroking the pregnant woman who will give birth to Hagen. These ghosts disappear, like a pantomime, whenever the haunted god turns to look for them.

With his mighty cry of “Das Ende”, translated here as “extinction”, instead of letting his fateful words echo in silence, Jones asks Wotan to light a torch and symbolically pass it to Brünnhilde. This not only kills a pivotal moment, but on opening night it was seriously missed. Later, the fight between Hunding and Siegmund is equally messy, while the latter’s death, the result of a spear thrown in the back, drew audible laughs. 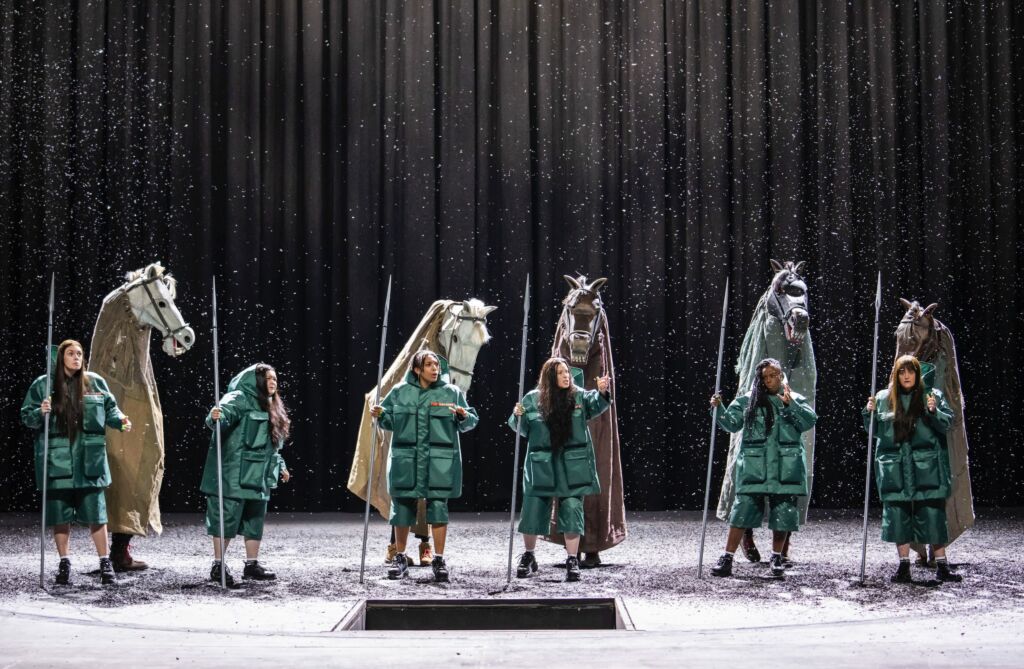 Act three opens with the famous Ride of the Valkyries and a lonely pixie doing a maniacal tapping routine Riverdance (Why?). There followed the simultaneous appearance of the eight Valkyries, depriving the scene of the meaning intended by Wagner to see them come together one by one (again, why?). Oddly enough, they are dressed much like park wardens with matching green plastic shorts and shorts. Their horses – bodies encased in gray or brown straw sacks with battle horse heads – staggered around the stage for half an hour, mostly gathering into a desolate-looking group at the rear, in front of the aforementioned gray curtains.

Just before the end, Wotan’s farewell is interrupted by the descent of six large cables that the distraught god must laboriously tie to his sleeping daughter. It is duly hoisted ten feet into the air to a place where, if there had been a fire, a scientist or cook could tell you that it would roast most efficiently. 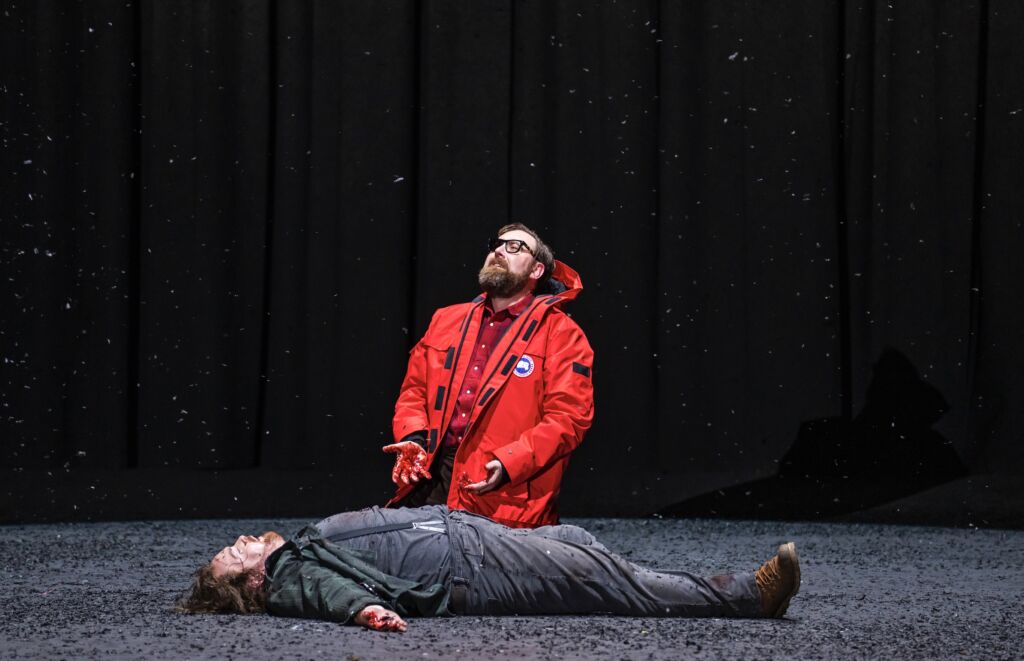 Jones may be an insightful director, but too much here seems unoriginal, or worse, cliché. With little sense of the overall concept, there is a disconnected and scattered feel to the whole thing.

If it all adds up to a production dud, in the pit things weren’t much better. Martyn Brabbins is a good conductor, but here his heavy reading lacked both nuance and dynamism. There were times when everything went well for a while – delicious chamber textures in Act 1, Wotan’s sensitively manipulated storytelling, a hushed and intense voice. Annunciation of death, and parts of Wotan’s big farewell – but all too often he seems to let the music roll on autopilot with insufficient drama formatting. ENO’s strings and wind played well, but Brabbins’ orchestral balancing was hit and miss, and the brass had moments of horror on opening night. He is, however, a sensitive accompanist to the singers, letting the voices and words express themselves with admirable clarity. 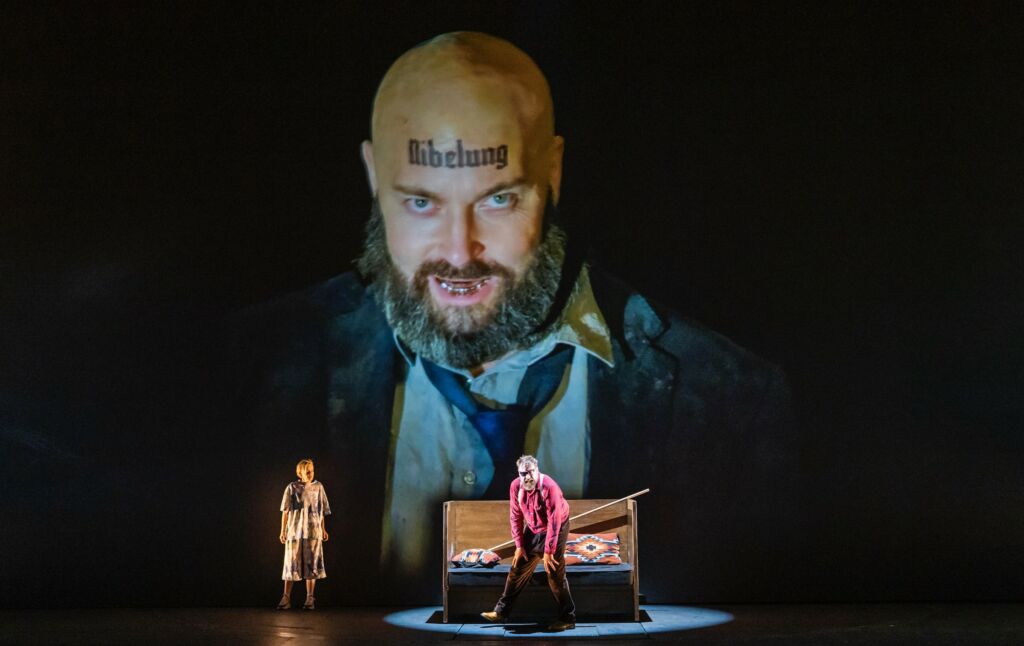 Rachel Nicholls as Brunnhilde and Matthew Rose as Wotan. Photo by Tristram Kenton

Vocally, the highest honors go to Matthew Rose’s sonorous and sometimes gruff Wotan. He handles the challenges of the role well range and applies Lieder-type attention to text development. His hollow funnel of “By My Own Chains I Am Bound” is just one of many powerful moments when we feel his terrible dilemma. Jones chooses to play the childish side of the character and Rose puts it well, and if he gets a little tired in the end, so do a lot of others.

Nicky Spence’s Siegmund is also wonderfully clear. He might not be a Heldentenor as such, but his perfect diction and careful way of shaping words and phrases creates a very three-dimensional and likeable character. He’s especially strong with Brünnhilde in the second act – with Wotan’s narration, the musical highlight of the show. Pulling all the cylinders out, he should prove more convincing in the latter part of act one, but Jones’ staging allows little connection between the siblings, and turning them around in the end works the point without allowing an explosion of passion. Like Sieglinde, Emma Bell’s soprano is effective lower down where she really connects to the text. When pushed, however, the voice spreads and its vowels tend to merge into one. Brindley Sherratt’s Hunding is suitably menacing if he’s brutal in two dimensions. Vocally, it’s dark and dangerous at the bottom, although it’s lighter and slightly less effective at the top. 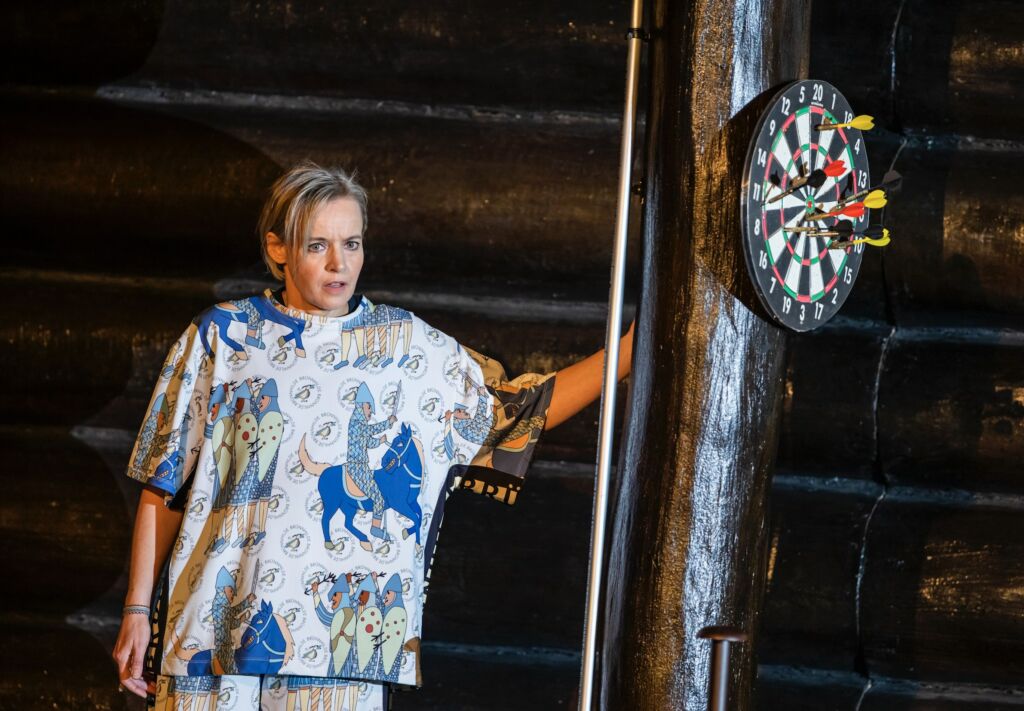 As Brünnhilde, Rachel Nicholls has a lot to offer. Her small frame is perfect for conveying a sense of a rebellious teenage girl, and she captures the character’s awakening femininity and the emotional conflict that follows. The voice has a laser beam quality that carries well on the orchestra, although it may lack body when pushed and may be short in color above the staff. Kicking Fricka out of a box to the right of the stage, Claire Barnett Jones scored a triumph on opening night in a role you can easily imagine tackling for real. Her rich burgundy mezzo has a formidable body, and the top should gain power with a little more experience. Although the whispered Valkyries were the loudest. In the Stroll, all were remarkable in the complex overall work that accompanies the confrontation with their irate father.

The production is sung in English in the new translation by John Deathridge. It’s a pretty patchy affair with moments that would seriously rock Wagner’s Meistersingers (“Courage, I think he’s got it,” Sieglinde sings at one point, apparently channeling Yoda).

With New York – for now at least – engaged in directing Jones for 2025, ENO has a lot to do with it. Valkyrie. While Met chief executive Peter Gelb won’t be inheriting the conductor, soloists, or translation, in its current form, it’s hard to see this disappointing business unleashed in the Big Apple (or, we imagine, in Australian cinemas and others around the world). Watch this place.

ENO The Valkyrie runs at the London Coliseum until December 10.

A new take on a classical ballet ...